Tragedy and Comedy in Suffolk and London.... 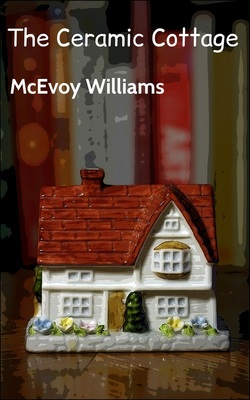 On the surface this is a humorous, tender story of misunderstanding and clumsy attempts at atonement. Beneath that surface is another layer that gently challenges assumptions.
Patricia and Shane have a dreadful misunderstanding when he hears what she has allegedly said about him and the porcelain model of a country cottage he gave her for Christmas. He had been about to propose but sees that the cottage represents far bigger issues that could divide them.
In the following chapters we learn of the background to that evening. Distant cousins, their Polish grandmothers arrived in Suffolk together after the war. Patricia’s family is the more prosperous. Shane, though a farmhand, is very bright if a little dyspraxic, and his plans to study medicine had to be put on hold following his father’s illness and death. Yet he has kept alive his father and grandmother's dream of one day having a cottage in the Suffolk countryside. Patricia, who gradually comes to appreciate his immunity to peer-pressure, finds him a welcome change from her friends and colleagues, who seem very conformist in their proclaimed nonconformity, though Shane does have his idiosyncrasies. The ceramic cottage is typical of his inability to appreciate what an intelligent person is ‘supposed’ to laugh at, and is symbolic of his view that people’s beliefs and tastes stem largely from the way they wish to be seen.
Other influential characters are the formidable old feminist firebrand, Lyn Krunch, who despite their differences likes Shane’s warmth and his refusal to accept received opinion from any direction, including hers. Shane’s lifelong friend and mentor, the gay Darren, also has an important role to play.


The Ceramic Cottage is available as an e-book on Amazon Kindle, price £1.99 or around $2.45 in the US. It can be purchased from the Amazon site in in other countries for approximately the same price in local currency. 196 pages. See below for latest offers.
This is the link to the US site:
http://www.amazon.com/Ceramic-Cottage-McEvoy-Williams-ebook/dp/B0169AR0IE
﻿And the UK site:
http://www.amazon.co.uk/The-Ceramic-Cottage-McEvoy-Williams-ebook/dp/B0169AR0IE

Note: You do not need a Kindle device to read Amazon Kindle e-books as their app can be downloaded free. Details on the linked page.

The Ceramic Cottage is FREE on Amazon Kindle on 19 and 20 January 2018.
The start time is midnight Pacific time, which is eight hours behind UK time.

​Reviews would be welcome, especially on the US site where there are still only two so far, one of which contains a serious spoiler and inexplicably describes the novel as a short story. In fact it has 196 pages and over 73,ooo words. I can only assume this reviewer enjoyed it so much that time went by very quickly for him.
​
Those on Amazon Prime can always 'borrow' the book free of charge.

Excerpt
Patricia has invited her distant cousin Shane and the two-and-a-half year-old Harry to come and stay with her in her London house-share for a week-end. One of the guests at dinner is the feminist writer, Lyn Krunch.

‘It’s a pity he’ll miss meeting your guest,’ said Shane as he put the now very sleepy Harry to bed.
‘Yes it is, but maybe she can pop her head in to take a look at him.’
In truth Patricia doubted if the somewhat abrasive Lyn (whom Julian had dubbed ‘Sister George’), was the kind of person who would coo over children. It seemed even less likely when Lyn arrived in a tetchy mood, having just had an argument about parking with the tenant of the flat she let out.
‘How was I supposed to get my car out with that bloody thing in the way?’ was the nearest to a greeting any of them received. It was the aroma coming from the kitchen that softened her.
‘Ah, good honest food!’ she enthused. ‘Such a change from the piss-elegant experiments you often get these days’ She repeated the compliment when the meal was served. Indeed, Shane’s cooking impressed her more than Patricia’s information over dinner that he had read the The Female Onlooker.
‘You probably gave it to him to have a squint at when you knew I was coming. It’s a bit dated, very Seventies. I’d just spent a couple of years at Berkeley in California and the martyred tone was obligatory. So what did Shane think of it?’
Patricia considered this an unfair question. How was a part-time A-level student supposed to answer, especially one who had so far come across as a little shy? Julian sniggered slightly, probably expecting Shane to come up with something like a lame ‘very nice’.
‘Well,’ said Shane, who had dutifully given Lyn’s work some thought, ‘you say that a male mind has been imposed on women in literature so that women have become mere observers. I’m afraid I can’t really agree. You don’t seem to have taken into account the way boys are brought up mainly by women in their early years and how they’re often conditioned to see a woman’s point of view and made to feel guilty when they don’t. Male writers have had to become almost female in their thinking, and the view of romance is a largely female one, at least a good man is always the one who moulds himself into the female romantic ideal. Even some of the more recent male novelists who make a point of seeing things from a bloke’s point of view are still aware they’re doing something naughty and rebellious. The criticism of them often stems from their having departed from the idea that the female view should take precedence.’
Patricia felt uneasy for Shane’s sake, while Julian looked forward to a fracas. Lyn Krunch was not known for being gracious in the face of criticism even from her academic equals; it was simply not conceivable that a boy who had not gone on to higher education could offer such a challenge and get away with it. Talk about fools rushing in!
‘I think it’s a bit far-fetched to suggest that spending your early years surrounded by women could affect your attitudes later,’ said Julian, seeing this as an effortless opportunity to earn some Brownie points.
‘Oh, stop being such a male Uncle Tom,’ Lyn laughed, ‘it’s nowhere near as far-fetched as some of the theories we used to come up with, indeed it’s entirely likely. As it happens I’ve been thinking along similar lines myself lately. I have the same difficulty with the theory that men gave women an air of mystery to keep them at a disadvantage: it always seems to be women who have done most to promote that air of mystery, in fact much of feminist theory is based on the assumption that men can never understand women while women know all about men and what motivates them. And as Shane says, women largely have control of children in their formative years. Who knows for sure which gender, if either, was more responsible for the relationship that evolved? In harsher times it must have suited women very well for men to be the ones who risked their lives doing the dangerous jobs and defending the clan while the women stayed by the fire looking after the children.’
She’s being patronising, Patricia supposed, but they were never to know how that particular topic would have progressed because Shane thought he heard a sound coming from the room next door where Harry was sleeping. He went to investigate.
‘What a prat!’ said Julian when Shane had gone.
‘Oh, I don’t know.’ Lyn had visibly cheered up. ‘All I ever get from male students are bog-standard received opinions because the poor sods are too scared to challenge the myths mad old bats like me have pushed onto them. It’s quite interesting talking to a young man who doesn’t seem to know what he’s supposed to say.’

The opening part of Chapter  2 of The Ceramic Cottage briefly outlines how Patricia and Shane's grandmothers, Pola and Halina, came to be in England after the Second World War. Some readers with historical knowledge of the period will be aware of the background, others may not.
Pola and Halina had lived in that part of Eastern Poland that before the First World War had been in the Russian Empire. It was part of the newly independent Poland from 1918 until 1939, when Poland was partitioned by Germany and the Soviet Union. The area had a mixed Polish and Ukrainian population. A large section of the Polish population was deported by Stalin to Siberia and Kazakhstan in 1940-41, and many of these perished either there or on the way there. When Hitler attacked the Soviet Union in June 1941, Stalin found himself the ally of Britain, and following an agreement with Churchill and the Polish Government in exile he agreed to an 'amnesty' for the Poles he held captive (although they had never actually been tried or convicted of anything). Families of males of military age were also to be permitted travel to Iran from where they could join the Polish armed forces operating alongside the British.

After the war that part of Poland remained in the Soviet Union and is now divided between modern Ukraine and Belarus.
As though that were not bad enough, Halina was to suffer an additional loss. On the night of the her deportation in 1940 she had left her infant son, Bogdan, with relatives. Three years later, during the German occupation, the entire village was massacred by an extreme Ukrainian nationalist faction. Many villages suffered a similar fate.
​
Halina's love of Suffolk, passed on to Shane, is partly because it was the safe haven she had dreamed of during the dark days.

(The reproduction to the left is The Cornfield by John Constable, painted on the lane between Dedham and Stratford St Mary, just south of Ipswich).