Comments, moans and occasional enthusiasm about matters historical and literary.

Some things I don't believe... 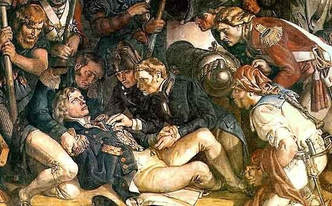 Go on, give him a kiss!
I was on a travel website a few week ago and someone commented that Bow Street police station was the only one in London not to have a blue lamp above its doorway. This, we were informed by a contributor, was because the blue lamp upset Queen Victoria when she was on the way to the opera at Covent Garden as Albert had died in what had been known as the blue room. The blue lamp was therefore replaced by a white one.
This is one of those ridiculous stories that crop up from time to time (well, quite often actually) but would surely be seen as nonsense by anyone who stopped to think about it for a few minutes, though even a few seconds ought to do it. Bow Street was the oldest police station in London and predated the introduction of blue lamps above police stations in the 1860s. Queen Victoria's route to the opera would not take her past Bow Street, and even if it did she surely would not wish to ban every blue item she passed because Albert had died in 'the blue room'. By 1861, when Albert died, there were pretty clear regulations and chains of command in most organisations, not least the Metropolitan Police, and the decision on the colour of a lamp above a police station would have been outside Queen Victoria's sphere. Tudor absolutism had been dead for over 250 years by then.
This is just one of numerous instances where poor Old Queen Victoria's name has been taken in vain. Add Albert to the mix and even the most implausible stories will persist. I read a piece on the History of Ipswich in which it was asserted that Queen Victoria never visited Ipswich because Albert had once received a poor reception when he visited. Albert did visit Ipswich once, but there is no record of a poor reception, quite the contrary. And many probably still believe Disraeli's alleged death-bed words when asked if he would like the Queen to visit him. 'Best not, she'd only want me to take a message to Albert.' A great story, and the wag who came up with it should be commended, but hardly likely. And there's the one that still persists in some gay circles, although its provenance only dates to the 1930s, about the penalties for homosexual acts. According to the myth, when asked to give consent to the Bill, Victoria protested, 'Surely ladies don't do that kind of thing?' It was agreed that they couldn't possibly, so all reference to women were removed from it. The problem with this story (apart from being daft) is that there is no record in Hansard of an amendment going through Parliament, and if the Bill was altered without Parliamentary approval there would have been a constitutional crisis not seen since the 1689 revolution.
Some gay people seemed particularly prone to such tall stories (the ruder the better), perhaps because of the drama of it. I have been told, for example, that the phrase 'going up a peg' referred to the way rent boys in ports sat on spikes of different sizes to show er.. what they could take, and the prices they could command went up in proportion. That's just a bit too eye-watering for me.  And, of course, there's the theory that the Captain Pugwash series had a gay subtext. Apparently its cast included Roger the cabin boy, Seaman Staines and Master Bates. There were no such characters, but the story did the rounds for years all the same. The mutiny on the Bounty came about because Captain Bligh and Mr Christian were gay lovers who had fallen out. And Napoleon had a very small penis.... Oops, sorry, that one has recently been shown to be true!
Not that gays are the only ones who sometimes let their imaginations run away with them: homophobia has also led to distortions. I was reminded of one of these a couple of weeks ago while watching Countdown. The host, Nick Hewer, repeated the myth that Horatio Nelson really said 'Kismet, Hardy' and not 'Kiss me, Hardy' while dying on the deck of HMS Victory in 1805. In fact there were three eye-witnesses who reported him as saying 'Kiss me', none who reported 'Kismet'. Nor is it likely that he could have, as the word did not enter the English language until later in the 19th Century. 'Kiss me' was not so surprising at the time, as before the mid Victorian era men kissing (in a platonic way when greeting or saying farewell) was not so unusual in England, as it was (and is) in the rest of the Continent, but after strong anti-homosexual legislation and the Oscar Wilde trial, many became terrified of any hint of such inclinations. The 'kismet' nonsense seemed to gain currency again in the 1960s and 70s, when it was considered beyond credibility that a hero like Nelson could have been a poof, and I can remember the theory doing the rounds at that time, as Nick Hewer obviously did. All right-thinking straight men had to believe it was 'Kismet' and only queers would want to believe otherwise, so fear helped the theory along. Yet 'kismet' was not really in use even then, and only seems to have become widely known as a result of the Nelson theory. I have yet to see it in English literature before about 1970, but if anyone knows otherwise I would be happy to learn of its existence anywhere in the works of Dickens, Eliot, Trollope et al. In fact I'll buy a drink for anyone who finds it.
Updated 18 September 2017.